Baildon Methodist Church member, David Warner, is happy to announce that his book Just A Few Lines…the unseen letters and memorabilia of Brian Close has now been published and has received some excellent media reviews.

The book was published by Great Northern Books and printed in India.  It was due early May but the shipment was unable to be released by the docks in India for several weeks due to Covid-19.

Shortly after Brian’s death David visited Brian’s widow, Vivien, to see if she had any cricketting items of interest that might be referred to the Yorkshire Cricket Foundation’s Archives Committee for their significance to be properly assessed.  To his amazement he found that she had recently acquired a huge number of letters and other memorabilia that the Rawdon-born Brian had sent around 70 years ago to his old friend from their Aireborough Grammar School days, John Anderson, who lived all his life in Horsforth and died only a couple of weeks after Brian.

The letters started shortly before Brian made his Yorkshire debut as an 18-year-old quickly followed by his first Test appearance at 18 years and 149 days – England’s youngest Test debutant.  They continued through his tour of Australia with MCC in 1950-51 and Pakistan in 1955-56 when the dousing of an umpire by England players led to a diplomatic row and almost resulted in the tour being abandoned.

Although it is generally accepted that Brian had a miserable tour of Australia as far as the cricket was concerned, these letters show that he enjoyed life to the full off the field.

It is often forgotten that Brian was a professional footballer on Leeds United’s books even before he played cricket professionally and he later enjoyed spells with Arsenal and Bradford City where he suffered the injury which forced him to give up soccer.  These periods of his life are also written about in detail along with his Nation Service days in the Army at Catterick.

The book costs £20.00 and David has pledged he will give 15 per cent of any sales through these notices to the Baildon Methodist Church Building Fund.  He can be contacted either by e-Mail or Mobile 07808 165824.  He will sign the books and deliver them personally or send them post free. 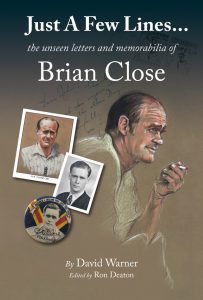