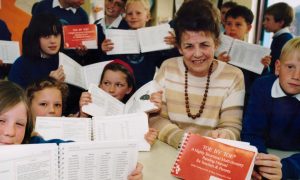 Keda Cowling, died aged 94, started her career as a teacher at Sandal primary school in Baildon, West Yorkshire, in 1968.  Her great passion – and soon her all-consuming obsession – became the teaching of reading.

Keda would ask the parents of any struggling readers for permission to teach their children at her home – without charge – at the end of the school day.  She tried anything and everything to see what helped and this process of trial and error was the genesis of her reading system that later came to be known as Toe by Toe.  Keda had chosen the name when a grateful parent said: “I see how it works now. Progress by tiny steps – almost one toe at a time …”

Toe by Toe was finally published in 1994 and Keda’s Little Red Book has now taught hundreds of thousands of people, young and old, to read.  It has been used in prisons in the UK, Ireland and Australia, with literate prisoners teaching their counterparts in their prison cells. In recognition of her life’s work, Keda was named the Sue Ryder Yorkshire Woman of the Year for Education in 2011.

Born in Saltaire, West Yorkshire, she was the daughter of Annie (nee Hollywood) and Henry Brannan, a mill worker. At the age of 14 Keda got a job at Salts Mill in Shipley and, like so many of her contemporaries, she was unable to accept her scholarship to the local grammar school for financial reasons. She married Albert Cowling, a bricklayer, and raised a family, and it was not until 1965 that she returned to education, at Bingley Training College, leaving in 1968 with her certificate of education.

Throughout her long career, she was absent from school for only two days after breaking a leg in the icy playground. Three days later, leg in plaster, she was back in the classroom. So many children discovered a love of books and stories after listening, enthralled, as Keda read, and embellished, The Borrowers at the end of the school day. Twenty years after she retired in 1989, middle-aged people in Baildon would stop her in the street to thank her for their love of books.

Keda and Albert, and Keda’s brother, Pat, were the founders of the Baildon Edwardian Society, which met at the Angel pub every week for an evening of dressing up, singing and entertainments; members of the society also visited local nursing homes. It lasted for 20 years until Albert’s death in 1997.

Keda is survived by two sons and four grandchildren. Another son predeceased her.