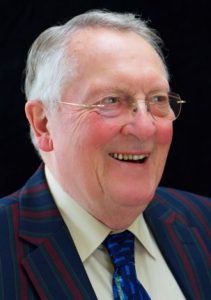 Maurice was born in Thornton, to Winston and Nellie.  One of his earliest memories was moving home in 1937 on Coronation Day. A day his Dad, an engineer at a mill in Allerton, could be sure to be off work for!  An only child he was doted on by his parents and his two aunts Ethel and Bertha who were a fundamental part of his life until the day he died.

Maurice grew up in Thornton and attended both Primary School then Thornton Grammar.  His was a happy childhood, full of adventures with pals; often involving fireworks or building something on wheels design to go very fast down a steep hill!

He was a regular attender at Thornton Methodist Church where he developed his strong Christian faith which gave him peace and guidance throughout his life.

After school he went to work at Bradford Permanent Building Society. He then went to join the RAF to undertake his national service where he became a Navigator. He loved his time in the RAF and had vivid memories of being posted to Winnepeg in Canada

Maurice retired in 1990 but was not short of something to occupy him. He found many friends in Ionic Lodge, Baildon. He joined the video club and got involved in the Men’s Forum. His work for Baildon Methodist Church was another role he enjoyed and he undertook many duties over the years.

Maurice died knowing he was loved and cherished as he had been throughout his whole life. He also knew where he was going, saying to us during the past three years “it’s a win-win, if

I’m here I’m with you all, if not I’m with Alice”. As a dear friend wryly observed following his death “that’s your Mum’s peace shattered!”

Thanks to Maurice’s daughter, Dawn, for the above which has been paraphrased from the Eulogy she gave at his funeral