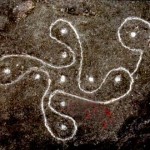 on a donkey, or a colt, I am unclear about the difference.  The important thing was that this echoed a prophecy of Zechariah indicating this was a King riding the animal. The symbolism was the thing.  People read symbols.  People like symbols because they short-cut a lot of thinking and working stuff out.  Sometimes, of course, we get the meaning of symbols wrong.  Sometimes symbols change their meaning over time or get hijacked for a cause.

Near us, on Ilkley Moor, is a large rock called the Swastika Stone.  The only identical design known is from Sellero in Italy, both date from about 400 years before Christ, but the swastika is widely used throughout the orient and, in Sanskrit, the word means “It is Good”.  For most of us, it changed its meaning when it came to represent the Aryan “race” in Germany in the 1920s.

In 1986, the Beastie Boys, a Detroit Rap Group, decided to wear VW car symbols around their necks as jewellery.  For a while, VW offered free badges to fans to stop them vandalising cars.  For a while, the symbol changed its meaning. Everyone in the world knows the patented shape of a Coca-Cola bottle and most recognise the M sign representing MacDonald’s.  But these shapes are recent.

Since about 400 AD, Christians have been recognised by a simple cross or crucifix; the empty cross for protestants and the crucifix for catholics.  What does it represent?  From time to time the cross symbol indicates repression.  The terror of Constantine’s army;  the burning of martyrs in 16th Century England; the bombing of birth control clinics in the deep South; the persecution of Gay men in Uganda.  “Taking a Christian Position” is often used to justify some fundamentalist hatred of a dissident or opposing group.

Crosses were erected in public squares, when towns were given market charters in the 13th and 14th Centuries to remind traders to deal with fair weights.  Some people wear a cross as jewelry;  churches all have one prominently displayed;  I know people who carry one in a pocket to remind them of the value of self-sacrifice.

There is almost universal recognition of the symbol of the cross, because of next week, Easter.  What people make of it, how they interpret its meaning, depends on their experience of the actions of those who wear it, and the influence of the institutions that display it.  Those of us associated with the cross need to take care how we bear such heavy responsibility.  And Jesus on a donkey may be a King, but perhaps not as we understand the term.

Mervyn posts a reflection each week. Please join in; he welcomes comments.