We celebrate Easter this year overshadowed by events in Europe, 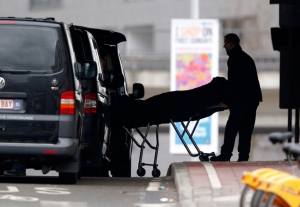 and at home, about Europe.  A small and unrepresentative sect of Islam, disowned by most Muslims, has taken to seducing young men and women to destroy themselves and many other people by means of suicide bombs.  In the same way, Christians indulge in terrorist violence across the world:  the Anti-Balaka in the Central African Republic; the NLFT in Tripura, India;  massacres by Maronites in Lebanon;  and The Lord’s Resistance Army in Uganda, who train child soldiers.  In the USA it is difficult to know where to start: The Covenant, the Sword, the Arm of the Lord, Defensive Action and the Montana Freemen all maim and kill those whom they despise in the name of the Christian faith.

Jesus, reported by Matthew 7:16, urges us to judge people’s ideas by the fruits that they bear.  Bad fruit indicates a tree that should be chopped down, what good is it?  Any belief that leads us to inconvenience, despise, reject, or deny human rights to any of God’s children is one to be discarded.  We must remember that quoting the Bible has led to some monstrously bad fruit:  the American slave trade, apartheid, and the suppression of women on a scale that makes the burka look like high fashion; the constant denial of scientific evidence in favour of inherited prejudice.

Surely judging Islam by its extremists is a fruit that is rotten through-and-through.  As followers of Christ, we do not feel the need to apologise for the Lord’s Resistance Army.  The bravest person I have seen recently was the Muslim who took his prayer mat out into the minute’s silence for the carnage created by the El Bakraous brothers in Belgium;  demonstrating his obedience to a peaceful faith.

When we talk about our Christian Faith, we must not only think of its Biblical origins, but of its fruit.  How does this faith change our lives?  How does this faith commend Christ to others?  How does it show the love of Jesus to those on the edge of society?  If, at any point, we find ourselves siding with a majority against a minority, we must retreat in prayer, suspicious of our motives and motivation.