Reflections of a Lay Pastor: August 27th 2017: Party time for a new temple

Reflections of a Lay Pastor: August 27th 2017: Party time for a new temple 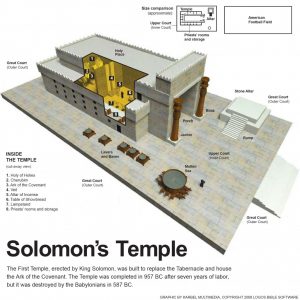 on was not shy of claiming credit for its construction, he was in a bragging mood.  Apart from sacrificing 22,000 cattle and 120,000 sheep and running a party for two solid weeks he also prayed, and his prayers deserve study.

Solomon asked God to hear the prayers that his people offered in this temple, and to respond;  instructively, he includes foreigners amongst those who can use the prayer facility.

Solomon had devoted a huge part of the nation’s wealth and most of his life to building the temple.  The huge stones now examined by archaeologists that formed its base are estimated to weigh over 500 tonnes each, represented a very significant engineering effort.  Predictably, the building of the temple heralded the end of the Kingship.  Kings evidently had tastes that were just too expensive.  But Solomon’s investment in the building gave him good personal reasons for emphasising that the prayers said in the new temple were somehow more important, more effective, that prayers said elsewhere.

If we consider that prayer is a response to the enormous complexity and injustice that we see around us, and an attempt to dedicate ourselves to righting wrongs, supporting the weak, nurturing the sick and the orphans, providing for the homeless, etc. then coming together to find a course of action that we can justify in the light of the life of Jesus is a good idea.  There is some sense in urging people to join together in one place for prayer, and to providing a building for that purpose, without any pretence that somehow the almighty, ineffable, God might live in it.

There is a good deal of sense in including “foreigners” amongst those whose prayers are valuable.  Most of the successful companies go out of their way to recruit people who think a bit differently, from different backgrounds.  People whose thought are based on a different premise coming to the same premises to sort out the world’s problems has to be a good thing.

So, let’s hear some support for maintaining a building, for prayer, for gathering people of goodwill together, for sharing of thoughts, and for including strangers.  It won’t be cheap.  It might help to consider God as an occasional guest or as a permanent presence.

And if there is occasion for a party that doesn’t cost the Earth, then let’s party too!