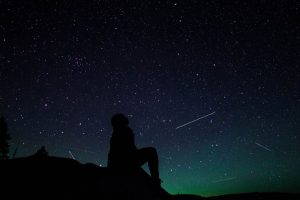 of a different way of life, that is now gone for most of us.  Joseph taking his family to be registered (from Nazareth to Bethlehem, perhaps) would have walked through some wild country, maybe with overnight stops, maybe under the bright, Middle Eastern stars.  Luke’s second reference is to shepherds, out with their flocks overnight, under those same stars.  I remember telling my (then) small children, as we lay in sleeping bags on our backs in Shipley Glen one August night in the 1980s, gazing up at some of the Persid Shower of meteorites, that most children in our country had never seen and were never likely to see a meteorite.  Today, it would be truer to say that there are many children who have never seen a star or even a planet.

Ancient peoples, such as those who built Stonehenge, have been able to calculate some future movements in the heavens with a degree of accuracy;  most of us would not know where to start the calculation.  The reason is that the night sky occupies none of our conscious or unconscious thought.  We no longer wonder at the heavens.  We have lost perspective.

There are ten million clusters of galaxies in the universe;  ours is called Laniakea;  it would take a beam of light 500 million years to cross Laniakea from one side to the other.  Our galaxy, called the “Milky Way” is one rather tiny part of the Virgo Supercluster, which itself is a small component of Laniakea.  Most people have never seen the entrancing edge-on view of the Milky Way which is visible on almost any clear night.  The Milky Way contains about 200 thousand million suns, of which ours is one of the smaller ones.  All but one of the star-like things we can see in the sky are within the Milky Way, so small is our vision.  It is 100 million miles even from here to our sun.  A million is a big number, there are a million seconds in a fortnight.

I look up at your macro-skies, dark and enormous,
your handmade sky-jewelry,
Moon and stars mounted in their settings.
Then I look at my micro-self and wonder,
Why do you bother with us?
Why take a second look our way?

When we get anxious, heated, snappy, too much to do, a touch self-important perhaps;  when we are tempted to think that we are amongst the bigger fish in this pond of ours;  it would help if we could see the stars more often;  it might lower our blood-pressure.

Yet, everything we do, every conversation, every decision, is really quite important to someone.  We have the power to cheer or to depress, to love or to hate, to be kind or cruel, thoughtful or ignorant of the needs of others.  We are, after all, just a little lower than the angels.