The Greeks had a word for it and we haven’t.  Koinonia occurs about 20 times in the New Tes 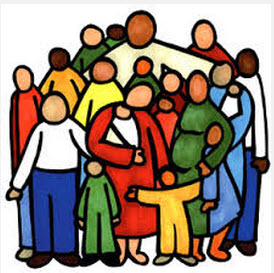 tament and it means something like fellowship, communion, a joint present or, sometimes, looking after one another.  Ever since we were told that there was no such thing as society (and perhaps this was not meant as it has been later interpreted) we have seen people becoming more important as individuals;  having more rights and fewer responsibilities.  Indeed, the phrase “Sovereign Individual” is being used to indicate that we are on our own, and that if someone makes a lot of money, good for them, they have no responsibility towards those who have become poorer.

Jesus did not seem to take this point of view.  He apparently spent much of his time on Earth mixing with, and giving strength to, the poorest and most disadvantaged.  If we claim to be Christians, we should be trying to follow in his footsteps.

If you want to detect where the Greek word in the Testament is Koinonia, look for “One another” and “Each other” phrases.  Koinonia is being in agreement with one another, being united in purpose, and serving alongside each other.  Anyone who has tried to run a church knows that this is far from easy.  The Early Church had just as much difficulty.  People develop strong differences of opinion that prevents them talking to each other and so they diverge, never really appreciating the other’s point of view.  I expect that in every church in the land right now there are people with very divergent opinions about the European Union;  these differences may tear some communities in half.  We can see the left-overs of such disagreements in villages that used to make their money from coal mining.  Striking miners’ families and the families of those driven by hunger to work during the strike still don’t speak.

Where people cooperate and look out for each other, they achieve much more than they could do separately.  Not only that, but other people encountering the cooperative group immediately sense the loving atmosphere, often created at a cost to individual pride by people who would rather be loving than be “right”.

Koinonia is the opposite of the Sovereign Individual philosophy.  It is the opposite of suspicion, greed and hatred.  It betokens welcome, smiling, working to create and to maintain community.  It can only be achieved in our unpredictable climate if we have buildings where people can gather and take part in activities.  So it behooves churches to provide these facilities for community groups that have similar purposes of bringing people together, just because they are people made in the image of God, for whom the Saviour died.  Koinonia – let’s get used to the word!