Jesus called the fishermen (Mark 1:14-20) and they gave up their livelihood and followed him.  What a risk!  Yet this is how movements begin.  Sometimes, it will affect the lives of all it touches, Gandhi’s “Satyagraha” movement, non- 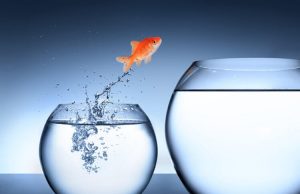 violent resistance to British Rule, for instance.  This is sometimes how individual families change their fortunes.  The question is:  when is it right to change tack, to change direction in life, to take the wind to port rather than starboard, to turn from poacher to gamekeeper or from market-trader to trader-on-the-market?

Changing tack always takes courage even if it seems the only course of action open to us;  sometimes “just” the courage to go on living in the face of apparently overwhelming pressures.  It is not the sort of courage that attracts the George Cross or the George Medal, it is often not recognised as courage even by those close by.  But lacking courage opens the possibility of missing a once-in-a-lifetime chance.

Changing tack requires sensitivity, an understanding of how our current way of living affects those around us and those far away, a recognition that a change on our part will contribute towards an improvement in the lives of other people.

Changing tack sometimes requires us to recognise that our current way of living is damaging to ourselves;  maybe our work or our habits, are causing us to do things of which we really disapprove.  To do one thing whilst believing something contradictory is called cognitive dissonance and it gradually wears away at the soul.

Above all, changing tack requires love.  Love for ourselves and love for others.  Some people feel that they are called by God to change, sometimes that call is from God-in-Others;  sometimes it is from the God-in-us.  Obedience to this calling requires a love for something greater than ourselves.

When the winds of change blow, let’s not be the sort of people who build walls, let’s concentrate on windmills.

Change is almost mandatory for those wishing to follow Jesus-Shaped lives.  We should pray for courage, sensitivity, and love, so that we may be aware of the necessity to change and may have the qualities that enable us to follow that imperative.  Jesus called them and they left their nets…what courage!