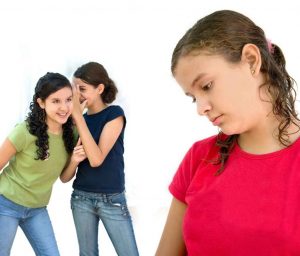 rations and for governments.   In Proverbs, Wisdom is portrayed as a wise woman trying to persuade us of the truth, in some versions, she lives just down the road from Sanity, Knowledge, and Discretion.  It is worth reading Proverbs 8 in as many versions as you can lay your hands upon, because the translation was not straightforward and different meanings come out.

The important issue is that we should seek and propagate the truth and refuse to “retweet” half-truths and lies.  Gossip is a valuable commodity if it contains true information;  it enables us to care for people effectively as knowledge of their sufferings is shared;  it enables us to share their joys and revel in their success (or be jealous, our choice).  But when gossip spreads lies then the Devil takes control of our tongues.

“If you tell a lie big enough and keep repeating it, people will eventually come to believe it. The lie can be maintained only for such time as the State can shield the people from the … consequences of the lie. It thus becomes vitally important for the State to use all of its powers to repress dissent, for the truth is the mortal enemy of the lie, and thus by extension, the truth is the greatest enemy of the State.”  Not my words but those of Joseph Goebbels, now used by every repressive regime;  and that includes many that count themselves as democracies if they are in thrall to social media, or powerful vested interests.

Thomas Jefferson repeated a truth in 1840 that had been developed over two hundred years by different speakers:  “Falsehood will travel over the country, while truth is pulling on its boots.”

Jesus spent some of his short ministry joining Lady Wisdom in proclaiming the truth that we were not bound by antique laws suitable for desert living and interpreted by Pharisees living in rarefied remoteness from everyday struggle.  Paul took up this mantra, as much as a child of the age was able to do so.  Peter, despite having lived with Jesus for three years, rediscovered that Christians need not adhere to Jewish laws.  Over and Over again the Church has had to rediscover that the really important truths that Jesus propagated were those of Loves, not Laws.

I suppose we all learn that repeating something often enough makes it acceptable to ourselves and maybe to others as the truth.  We do need to apply our God-given critical faculties a little more often to our behaviour, our habits, our speech, our beliefs and, most of all, to how we love.