Reflections of a Lay Pastor: June 25th 2017: Stepping up to the plate

Reflections of a Lay Pastor: June 25th 2017: Stepping up to the plate

1 Samuel 17 tells the story of David and Goliath.  The chronicler gives 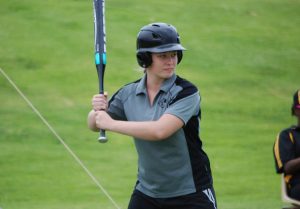 no details of the rights and wrongs of the battle;  we really have no idea whether this was territorial aggression on the part of the Jewish Nation or on the part of the Philistines.  It doesn’t matter.  There was a crisis.  The important feature of this story is the courage of the young man David, the beauty of his courage was captured for ever by Michelangelo di Lodovico Buonarroti Simoni in 1504:  “I saw

[David] in the marble and carved until I set him free.”

More recently, Australian nurse, Kirsty Boden ran to the aid of victims of knife-wielding terrorists on London Bridge who were killing and wounding because they believed they were doing the will of God.  Sadly, Kirsty, neglectful of her own life, died in the attack.  Earlier she had tweeted:  “Life is short and we must all use the time we have wisely”;  indeed!

Courage comes in many guises:  facing up to bullies, being the only one to disagree with a plan, standing alongside a victim of persecution,  bearing pain, illness, or death while expressing no concern except for the health and well-being of one’s visitors.  Observers see those being courageous as attractive; the light shines from their faces.  Sometimes they get medals.  Sometimes it is their parents who collect the medals.

“Don’t count the hours, make the hours count” is a good maxim.  Making your life count is, hopefully, a long-term project, in which there is room for a bit of backsliding and recovery.  Making your death count by improving the moral, ethical, or physical conditions in which others will live is a once-only opportunity, with no chance to practise.

“Stepping up to the plate” is an expression from USA baseball.  In a stadium of thousands of people, facing a ball approaching you at 100 mph with only a rounders bat in your hand; stepping up to the plate indicates a level of courage that most of us don’t possess.  In our own situations, we constantly meet up with tasks which “someone should do”, and it is tempting to think that “anyone could do it”, why me?  Then we have to decide how important it is that the task is done and weigh that against our own desire for a quiet life.

Jesus faced just this dilemma on many occasions:  healing on the Sabbath, turning traders from the Temple, kissing Judas, answering Pilate.  He frequently retired in prayer and reflection to work out what it was that he should be doing.  Unlike some Christians today, he figured that what he did as well as what he believed was crucial.

How often will a “David and Goliath” moment come our way?  When the chips are down, how will we respond?