In Genesis 11, the writer tries to account for the diversity of languages across 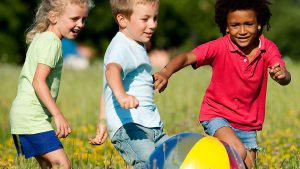 the known world.  People were smart, they got together to build a tower to reach to Heaven, God didn’t like that and so confused their languages so that they could not understand what each other was saying;  they could no longer cooperate with each other, and so became separate nations with separate languages.  This is not the God we know, but it is a memorable story.  It accounts for the strange and troubling situation that we can’t easily understand everyone we meet.

How is it that adults can’t seem to get on with other adults who come from different countries and speak different languages?  The story of Pentecost tells both of confusion of languages and of mutual understanding.  When people are “infected” by the Holy Spirit of God, the barriers between them come down.  As adults we do spend a lot of time judging other people rather than trying to get on with them, maybe children don’t.

Certainly, judging other people gets in the way of effective cooperation.  There is nothing quite like being disapproved of for preventing mutual understanding, and even for taking away the desire to understand.  The writer of Genesis 11, whose identity is lost in the mists of time, had a vision of God that we cannot share.  Surely, our God rejoices in cooperation between people, understanding between people, empathy between people.  Our aim in mission is first to understand the feelings and needs of others and then to minister to them, to work with them, becoming greater than the sum of the parts.

Little Britain can be a very judgmental, insular place, in which the desire to learn the languages of others is suppressed by a feeling of superiority.  Great Britain is better than that.  We do have a noble heritage mixed in with our xenophobic tradition and, as Christians, we need to establish the best possible communication with all those whom we meet.  Our missionaries do this.  Our aid workers do this.  Many of our diplomats do this.  Now, closer to home, we need to welcome strangers into our midst and endeavour to understand them, as urged by those many other writers of the Old Testament, who had a vision of a loving, all-encompassing God.