Reflections of a Lay Pastor: May 5th 2019: Revelation!

Reflections of a Lay Pastor: May 5th 2019: Revelation!

There are two stories from the lectionary today, with similar themes.  Peter had an unsuccessful night’s fishing and then, 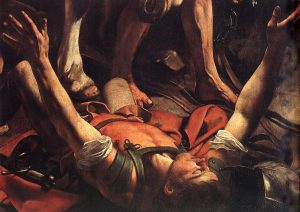 guided by a stranger on the shore, suddenly took a record haul.  He recognised the risen Jesus who offered him fish from the barbecue and then challenged him about his loyalty.  Peter, from that moment, changed from a trembling jelly to a pillar of the Early Church.  Saul, was coming from a successful persecution of Christians, including the stoning to death of Stephen, and was struck blind, on the road to yet more persecution in Damascus.  Only the courage of Ananias enabled him to regain his sight and he instantly became the second pillar.  At this point they had not met.  Saul, now Paul, had never met Jesus but his letters, predating the Gospels, are the first and biggest record we have of the thinking of the Early Church.

It takes courage to change one’s mind.  If ever we are uncertain about what to believe, it is better to listen to someone who has changed his or her mind.  Changing one’s mind requires deep thought, and a commitment to the truth which is stronger than the fear of embarrassment.  Changing one’s mind may be a sudden event, characterised by the use of the perfect tense:  as in “I was walking up Westgate when I realised for the first time…”  “Realised” is an event that happened just once, on a particular occasion.  However, the process that led to that event, which may be unconscious, may have been going on for a long time.

So Paul may have been becoming worried about his own actions and about his attitude towards the followers of Jesus for a while.  The accident on the road, followed by the confidence and courage of Ananias was the pivot point.

Peter, judging by the gospel record, went through a three-year transformation from what we imagine to be a confident, loud talking fisherman.  He spent much of those years misunderstanding Jesus, and finally descended into a snivelling wreck during Jesus’ trial and execution.  The pivot point was the face-to-face challenge of Jesus.

Christians will tell you very different stories about their conversions and the revelations that led them to this point of change.  They will tell very different stories about what the result of change was, about what they had been converted into.  It does not matter.  The only thing that does matter is our own relationship with reality, with God’s creation;  it is a matter of personal responsibility.

For some, it is a sudden realisation of a personal relationship with God.  For others, it is a feeling of responsibility towards the World and towards God’s other children.  What amazes me is how difficult it is to tell one from the other.  We often recognise Christians by their actions, by their response to need, by the way they shoulder responsibility for the world and by their concern for us and, unless we ask, we don’t find out how they describe the change that took place in their lives.

Change we must.  God’s world is changing.  It is in crisis.  Nastiness and falsehood stalk abroad cloaked as leadership.  Fires rage, species become extinct, whole populations flee persecution.  We need converted Christians like never before.  Yesterday’s Christianity, however appealing and comforting, will not do as a response.  Are we ready to respond to the revelation?