Luke 19 begins with the story of Zacchaeus which we perhaps know well.  However, Eugene Patterson, in his translation, The Message, corrects an impression propagated by many other translations of the Bible, which have inherited a wrong tense for one of the Hebrew verbs.  It 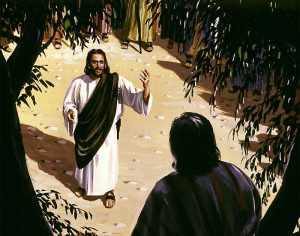 is very easy to do this;  following someone else’s mistake.  The GCSE biology syllabus for many years included an error (which I taught) about the life cycle of the amoeba, it has now been corrected. So here it is.  In the Message version, instead of Zacchaeus henceforth promising to give half his income to the poor and to restore any money he has obtained fraudulently fourfold, he explains that this has been his usual principle.

So, is this really a story about misjudging people?  Is it like those horrible stories of people being mistaken for paedophiles and hounded out of neighbourhoods?  Is it about how we should always reserve judgment until the facts are known?  The people who expressed horror at Jesus inviting himself to the house of Zacchaeus were wrong, surely?  Zacchaeus was one of the good guys all along.

Well, actually, I don’t think that is the full story.  Jesus saw Zacchaeus up a tree, friendless, isolated, desperate to connect even just visually with this itinerant teacher and healer, Jesus.  Jesus must have seen the desire in his eyes for a closer relationship with God.  There is something about people who are persecuted and excluded from society, an acceptance, a resignation, that shows through daily actions and demeanour.  Jesus invited himself along, allowing Zacchaeus to be a host, allowing Zacchaeus to do a service for Him, whilst all anyone knew was that Zacchaeus was a society reject.  Those who thought they knew him better, probably believed that he was an extorter of money from widows and orphans to line his own nest.

There is a comfort in joining with one’s neighbours to condemn someone else, someone outside the tribe.  The difference between Patriotism and Nationalism is that the first is motivated by love, the second by hatred.  The KKK in the USA have been (and again are becoming) a significant gathering place for many who feel inadequate on their own, by giving them someone to hate, someone whom they can consider to be inferior.  Jesus would not be part of this.

It was only after Jesus’ invitation that his true nature was revealed.  The welcome of Zacchaeus into the Fold of Jesus was his salvation, it was unconditional but it also allowed his goodness to be revealed.

How many strangers have found that being accepted into a church fellowship enables their best qualities to be revealed through service?  As church congregations, we do not just try to give to newcomers, but also to allow them to give to us.  It is an acknowledgement of their human worth, to allow them to serve.  We do like serving others, but sometimes it is better to accept than to give.  When ever we feel hatred or superiority coming on, we should refer back to the universal love that Jesus showed throughout his life, teaching, example, and death.