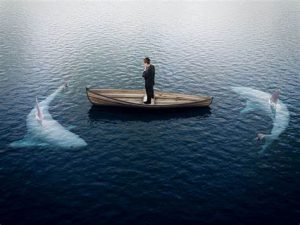 een set apart to proclaim as preacher, emissary, and teacher.  It’s also the cause of all this trouble I’m in”.  Anyone who runs a Sunday morning football training for eight-years-olds, anyone who tries to organise an open day for Cancer Research, anyone who enters politics to represent people and improve the world, will all know the truth that it brings trouble.  The same goes for anything to do with running a church.

There is bound to be conflict, there is sure enough not going to be enough money to achieve everything you want to do, people are going to fall out in spades about aims and objectives and about who does what and who believes what and who said what to whom.  It sometimes runs like this:  there are four people on a committee, they are called Everybody, Somebody, Nobody and Anyone.  There was a job to be done that Everybody knew needed doing.  Everybody was sure that Somebody would do it, and Anyone could have done it but in the end, Nobody did it.  Then Somebody was angry because it was Everybody’s job, but Everybody thought that Somebody else would do it instead.  Nobody realized that Nobody would do it.  So consequently, Everybody was cross when Nobody did what Anybody could have done.

It is not just the doing of things, it is the message that we try to put over and the principles we choose to stand by.  People disagree.  People are offended when the message affects their personal comfort or status.  Jeremiah experienced this, and Amos, and Hosea, in fact, all the Prophets and then, but not finally, Jesus.  Everyone who has taken a stand for, or against something has had trouble.  The trouble is getting worse because our social media enables people to criticise anonymously, and when they find that they cannot be held accountable, they descend into invective, threats, and crudities.  They need to get out more and stop being Nobodies.  Sometimes, people die.  I remember Jo Cox;  but everyone has their own respected martyrs.

Sometimes the problems get people down, and then they down-tools.  Jesus said in John 16:33: “In this godless world you will continue to experience difficulties.  But take heart!  I’ve conquered the world”.  And so we must carry on, whether as parents of children living their own lives (or wanting to, without having the means to do so), or as voluntary workers in a noble cause (teaching children to fit into a team, raising money for charities, entering politics, or even working in a church), or in any sort of leadership capacity.  Experiencing trouble is not the end of the world, being Nobody is.

In your situation, what would Jesus do?