Reflections of a Lay Pastor: September 3rd 2017: A Moses moment…

Reflections of a Lay Pastor: September 3rd 2017: A Moses moment…

You may have noticed a distinctly Old Testament theme in recent reflections.  Mervyn has been writing this blog since Easter 2011, coming up to seven years.  His reflections have been round the three-year lectionary of “scripture appointed to be read in churches” twice, he is on the third time round.  So, now it is time for the Old Testament!

Exodus 3 begins with the story of Moses and the burning bush.  Briefly, Moses is minding sheep for his Father-in- 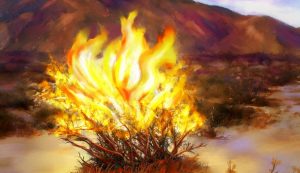 Law in Midian, miles from Egypt.  He goes to investigate a bush that seems to be on fire, a danger to his grazing expectations.  The bush does not burn away.  God speaks from the bush and tells Moses to lead the Israelites out of slavery in Egypt to a Promised Land.  It is the start of the present Middle East Conflict because, unfortunately, the Promised Land already had citizens (Canaanites, Hittites, Amorites, Perizzites, Hivites, and Jebusites;  quite a lot really) who had assumed that it belonged to them.  Moses made a few excuses but accepted God’s challenge.  What is there for us in this story?

Well, this was an ending and a beginning.  Imagine how Zipporah must have felt about her husband coming home with the news that God had spoken to him from a burning bush and they were upping sticks, leaving her six sisters and family security, prospects, friends and home, to travel to a dangerous future in conflict with the greatest power in the world at that time.  Imagine how her father felt, losing his head herdsman and his lovely daughter and grandchildren, losing the possibility of passing on his property to this promising young man.  So this was a giving up of something precious.

Imagine how Moses felt about how his inadequate speech would stand up when he addressed the Pharaoh.  Imagine how he might dread the uncertain journey, both to and then from Egypt.  Imagine the possibility of having to explain to a group of thousands of people that you had made a wrong turn back at the last waddi and needed to turn round.  He had no weapon that he knew of against the might of Egypt.  So this was also a choice to go into the threatening unknown.

Does this now sound like a familiar, rather modern, predicament?  A tedious career, after all, is a job that has gone on too long.  It perhaps went on too long simply because we ignored the opportunity to do just what Moses did;  listen to the voice of God and take a bold plunge to take up a challenge.  It might mean annoying some people, upsetting others, feeling that you were letting them down, not knowing who was going to take up the reins that you left dangling.   It is only when mature trees are removed from the forest that younger saplings have a chance to reach for the sun. Of course, we think some people get this wrong;  for instance, those who abandon their families and jobs to become suicide bombers, having heard what they consider to be the call of God.

We only get one go at life and we have to work out for ourselves how to make the best contribution we can to the future, bearing in mind our skills and talents, sometimes leaving one job to do another one better.  It takes courage.  It requires prayer and reflection.  It often benefits from discussion with people whom we respect.  Finally, however, the buck stops here, with me.  One life, live it!