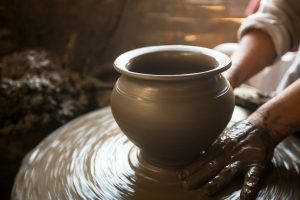 wheel.  Whenever the pot the potter was working on turned out badly…the potter would simply start over and use the same clay to make another pot”.  Let’s look at this from the perspective of being the clay:

I am really making something of myself now.  I started out with nothing, just as a lump of clay, and look at me now, on my way to being a real pot!  Don’t I look good?!  Oh No!  Everything I worked for is falling apart!  I am back to square one!  What a catastrophe!

People whom I know who have been made redundant.  With a few exceptions, they say that this was the unwelcomed beginning of a welcome new life, that they would never have experienced otherwise.  Sometimes, they have had to manage with less money and found it a relief, sometimes they have retrained for a new profession, sometimes they have become volunteers.

How we hate change!  It is tempting to regard ourselves as having reached the peak of our capability.  The profession we are in, the business we run, the number of rungs up ladder we have climbed.  Contemplating change is difficult.  Sometimes, even thinking about change can seem disloyal, a betrayal, a waste of time spent so far, an embarrassing climb-down from opinions we have expressed so openly.

Think of all the Nazis who, after the, to them, catastrophic end to WW2, had to come to terms with a completely new way of living;  no one disputes that it was better.  Think of all the gang members who have escaped the culture of oppression and violence, or the drug addicts who have reformed.  Not me?  Well of course we never think of our own lives as being less than productive or, if we do, we consider them immutable, no change possible.

In Luke 14: 33 Jesus is recorded as saying “if you’re not willing to take what is dearest to you, whether plans or people, and kiss it good-bye, you can’t be my disciple”.  That might involve some considerable changes.  We so often regard the fripperies of our lives as being those things that define us:  the house, the car, the occupation, even sometimes the commitment to a relationship that turns out to be trivial rather than deeply loving.

Jesus was clear:  if we are not prepared to give up a cherished lifestyle, and even formal relationships when they get in the way of discipleship, we can’t fulfill our God-given potential.  As Paul says in 1 Thessalonians 5:21:  “Don’t suppress the Spirit, and don’t stifle those who have a word from the Master.  On the other hand, don’t be gullible. Check out everything and keep only what’s good.”