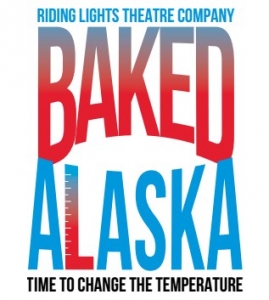 Written by Paul Burbridge and Jonathan Bidgood, Baked Alaska is the latest touring event from the Riding Lights Theatre Company

Vivid, sharp and deliciously entertaining BAKED ALASKA serves up the realities of climate change with flair and clarity about the temperatures involved.  In a high-energy, ‘seriously funny’ style for which Riding Lights is well known, BAKED ALASKA is something we can all look forward to… unless we do something about it.

Time To Change The Temperature

From the four corners of the earth come colourful, inter-connecting stories of humanity living with the wild, unpredictable effects of climate change.

Scientists, farmers, oil magnates, climate warriors, prophets, mothers, journalists and others just like you and me – we’re all in the mix and hungry for a recipe of hope.  In the struggle over power, some sound the warming bell, some blow hot and cold, while others make a pudding of the planet.

Touring has already started, and runs until the 28th November 2015