THE INJUSTICE OF CLIMATE CHANGE

THE INJUSTICE OF CLIMATE CHANGE 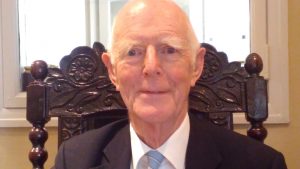 “Shalom” means “integral wholeness”. This should be a slogan for the climate change movement. For it means everything is connected: the peace and well-being of shalom lead to a single world order under one Creator God. All creation is interwoven to make the tapestry of all life, of which humanity is one bright thread.

All trees, all animals, all fish, all parts of God’s creation, provide different evolutionary threads which together make a brilliant tapestry. If too many threads break or are drawn out, the picture woven in the tapestry of creation is irredeemably damaged. It disintegrates. Attributed to Chief Seattle of the Squamish Native American people in 1855 is the deep and famous quotation: ‘The earth does not belong to the people. The people belong to the earth. All things are connected… One thing we know; our god is also your god. The earth is precious to him and to harm the earth is heap contempt on its creator.” We are now being brought to face these truths by our children. As one put it on a poster, “No intelligent species would destroy their only home and planet”.

Since we have read in Plato the teaching of Socrates from the fifth century before Christ, we have attempted to understand and practise justice. We are enjoined by Christ to love our neighbour as ourselves, his commandment I signally fail to obey each day. Jesus memorably chose a foreigner, a Samaritan, to exemplify our neighbour. Wonderfully, this leap of love means that for us our ‘neighbours’ are anything but ‘neighbouring’: we embrace the whole human world. And yet… we live our carbon intensive lives scarcely aware of the injustice such a lifestyle is bringing to the poor of humanity.

In Bradford it is often the poorer who live along the River Aire who are flooded; the richer live higher up. In York, the frequent floods never touch York Minster since the Norman Archbishop, who first built it commanded that six feet of rubble should be put down before the building began. The greatest injustice caused particularly by our incineration of fossil fuels is that it is gradually warming the oceans so that they are rising by at least 2 mm a year. Moreover, there is no sign of this ceasing for centuries. In Fairbourne near Barmouth in Wales the whole seaside community will soon have to leave since the inexorable rise of the sea by at least 2 mm a year will inundate their homes. Throughout the world the poorest often live lower; in Bangladesh the situation is so serious that whole communities survive by harvesting floating baskets of crops as they annually vacate their houses. I have lived in Botswana Southern Africa for three years and experienced water-stressed life. That country which is mostly situated in the Kalahari semi-desert has now had to build a 300 mile pipeline to bring water from mountainous Lesotho, since not a single river in Botswana flows through it and comes out the other side. The reservoir for Gaborone, the capital, loses 3.6 m of water of the year by evaporation alone.

Our God, let us not just say ‘shalom’, but act