Thoughts for the week: April 29th 2018 People who travel and people who stay home

Thoughts for the week: April 29th 2018 People who travel and people who stay home

If you had never rowed a boat, how could you row for 16 hours a day? 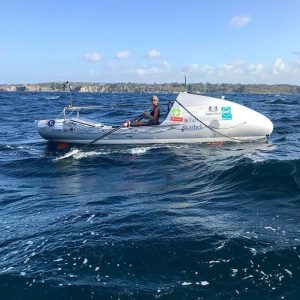 “The thought that eight months ago I was lying in hospital having my brain operated on, and now I am here having rowed the Atlantic, I guess I am a bit proud.

Her journey was only possible because of her personal discipline, and because she was prepared to reduce possessions on board to a bare minimum.  Anyone else involved:  parents, partner, friends, children: could only watch and wonder, they can’t share the pain, the despair, the small daily triumphs, they can only provide support when asked, anything else is intrusive.  Does that sound like being a parent to a teenager?

This was a self-imposed adventure for a worthy cause, like the voyages of St Paul, for instance, or Sigeric the Serious [sic] walking from Canterbury to Rome to pick up his archbishop’s certificate in 990AD;  Kiko’s the aim was to achieve the crossing, Sigeric’s was to get his Archbishop’s badge;  for Paul, the process of creating small Christian communities around the Mediterranean Sea was the true point of the travelling.  People have different aims.

Some journeys are hopeful quests for a better life somewhere else, some of these are very long.  The ex-German troopship, the Empire Windrush, crossed the Atlantic, slightly but only slightly faster than Kiko Matthews, at 14 knots in 1948.  Its 950 passengers had been induced to leave their homeland for better opportunities in their host nation, Great Britain.  What were they hoping for?  What welcome did they receive when the docked?  Their journey ended this week when the hostile environment we had created for loungers, layabouts and good-for-nothing black immigrants turned into a belated welcome for a noble group of valued hardworking citizens;  a seventy-year journey outdoing the journey of the Israelites.  We must be profoundly grateful that the Windrush Generation did not emulate the Israelites tactic of slaughtering those who stood in their way by virtue of being the accidental current occupants of the host country.

All these travelers have to decide how much stuff to take with them, what to do without, what they can’t do without, and whether they can carry it all.  They have to decide which way to go at every cross roads.  For most of them, as T S Eliot says:

The end of all our exploring will be to arrive where we started and know the place for the first time.

The quickest way, of course, to arrive home is not to leave in the first place, but that would eliminate all the learning along the way.

For some people the journey is not a choice.  More people than ever seem to be refugees, not travelling through choice but from necessity.  Many have seen family members killed and their houses burned or bombed, they have no home to which to return.  For them, the choice about what to take might be a very easy one:  just what they were standing up in when the bomb went off.  Facing burning deserts, bone-chilling cold, threats and ill treatment, hunger, thirst, and disintegrating shoes, possibly without medication on which their bodies might depend.

There are lots of stories in the Bible about people who travelled, making amazing journeys:  the Israeli slaves from Egypt, Abraham, Elijah, the Holy family to Egypt, Paul all over the Med.  There are many more recent stories of travels that also repay reading: John Moschos’ epic monastery crawl in the seventh century and then in the 1990s William Dalrymple following in his footstep;  Alistair Humphries cycling round the world on a beat-up bicycle for four years;  All the pilgrims on the road to Camino de Santiago.  All journeys are different, all have certain characteristics in common.

We, who stay at home, have some responsibility to those who travel seeking a new life, as we have just found out in our responsibilities to the Windrush Generation.  As the Empire Windrush docked at Tilbury what were its 950 passengers thinking?  What were they hoping for?  What welcome did they receive when they docked?

Let’s call those who of us who choose to or are allowed to stay put, the “Locals”;  and let’s never forget how fortunate we are not to be refugees.  It is our role to create community here.  We know from the accounts of those who have travelled how much they depend on Locals for kindness, for water, for food, for clothing, for shelter;  and how much they fear the hostility of other Locals.  What they don’t need from those through whose territory they pass, is to be told that they have the wrong destination or to go “home”.  All travellers know that asking the way is fraught with difficulty;  there is that class of people who don’t like to be thought ignorant and who will make up directions just for appearances.  People who travel generally learn a lot.

People who travel voluntarily to far off places in luxury (we call these “holiday-makers”) depend on Locals to have maintained the cute and entertaining culture of their ancestors (preferably with national dress) into which they can dip for a few days and say “how charming”.  Some visitors, at the same time demand Marmite for breakfast, declare every third meal “disgusting”, and require to be addressed in English.

But even those of us who stay put are on a spiritual and mental journey, unless we are actually spiritually dead and just giving a good impersonation of life.  The Gospels tell us that Jesus experienced a spiritual journey, retiring frequently to prayer and thoughtfulness to check his direction, changing his mind about his mission and revising his relationships with his religion and his family.

There are some parallels between physical and spiritual journeys.  True, some of us prefer to stay in the comfort of the beliefs we inherited from our parents.  We shall not learn as much as those who, through choice or no choice, embark on a quest for truth and understanding, but we can help them.  We can provide for their needs, we can listen to their tales and learn from their experience.  We can help them make sense of what they observe;  we can answer questions about directions, if we know the answers;  without “knowing” that their chosen destination is either right or wrong.

We who remain at home can be Mary with the bottle of ointment, we can be Simon of Cyrene who shouldered the cross, we can be Nicodemus who asked questions and listened to the answer.  As for the travellers, they can be as destructive as some football supporters in a foreign city after a disputed penalty securing a home win, or as welcome as a Red Cross convoy into a war-torn area.

Those of us who wish to travel on a journey of discovery, perhaps without leaving home, need to consider what we can manage without, what precious beliefs and practices are just a distraction from the business of learning about life.  We need to be strong, to be determined, to be kind to fellow travellers, even to those who are travelling in a different direction.  We have choices to make…